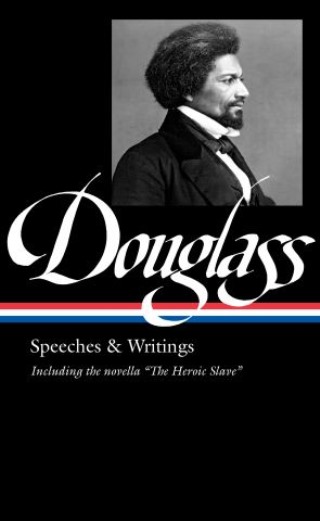 Library of America presents the biggest, most comprehensive trade edition of Frederick Douglass's writings ever published

Edited by Pulitzer Prize–winning biographer David W. Blight, this Library of America edition is the largest single-volume selection of Frederick Douglass’s writings ever published, presenting the full texts of thirty-four speeches and sixty-seven pieces of journalism. (A companion Library of America volume, Frederick Douglass: Autobiographies, gathers his three memoirs.) With startling immediacy, these writings chart the evolution of Douglass’s thinking about slavery and the U.S. Constitution; his eventual break with William Lloyd Garrison and many other abolitionists on the crucial issue of disunion; the course of his complicated relationship with Abraham Lincoln; and his deep engagement with the cause of women’s suffrage.

Here are such powerful works as “What to the Slave Is the Fourth of July?,” Douglass’s incandescent jeremiad skewering the hypocrisy of the slaveholding republic; “The Claims of the Negro Ethnologically Considered,” a full-throated refutation of nineteenthcentury racial pseudoscience; “Is it Right and Wise to Kill a Kidnapper?,” an urgent call for forceful opposition to the Fugitive Slave Act; “How to End the War,” in which Douglass advocates, just days after the fall of Fort Sumter, for the raising of Black troops and the military destruction of slavery; “There Was a Right Side in the Late War,” Douglass’s no-holds-barred  attack on the “Lost Cause” mythology of the Confederacy; and “Lessons of the Hour,” an impassioned denunciation of lynching and disenfranchisement in the emerging Jim Crow South.

As a special feature the volume also presents Douglass’s only foray into fiction, the 1853 novella “The Heroic Slave,” about Madison Washington, leader of the real-life insurrection on board the domestic slave-trading ship Creole in 1841 that resulted in the liberation of more than a hundred enslaved people. Editorial features include detailed notes identifying Douglass’s many scriptural and cultural references, a newly revised chronology of his life and career, and an index.

Frederick Douglass: Frederick Douglass (1818–1895) was born Frederick Bailey in eastern Maryland, the son of an enslaved mother and an unknown white man. In 1838 he escaped to the North and took the name Douglass. During the next decade he became an antislavery lecturer, achieved international fame with Narrative of the Life of Frederick Douglass, the first of his three autobiographies, and began publishing a series of newspapers. By 1861 he had become one of the most famous orators in the United States. Douglass continued his impassioned advocacy for freedom and racial equality until the end of his life.

David W. Blight is Sterling Professor of American History at Yale University and the author of Frederick Douglass: Prophet of American Freedom, which was awarded the Bancroft Prize, the Francis Parkman Prize, and the Pulitzer Prize. His other works include Frederick Douglass’ Civil War: Keeping Faith in Jubilee and Race and Reunion: The Civil War in American Memory. Professor Blight has written for The Atlantic, The New York Times, The New York Review of Books, and The Washington Post.